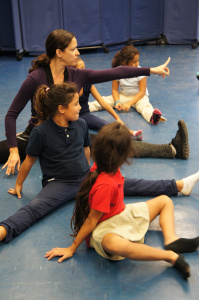 Originally from Upstate New York, A4L Teaching Artist Allisen Learnard moved to South Florida 11 years ago and received her BA in Dance with a focus in Psychology from FIU in the Spring of 2006. She has worked with A4L since 2008. Below, she writes about her experience teaching an after-school dance class at Flamingo Park, incorporating themes of conservation.

This week, we have begun studying for our performance, coming up in several weeks. I say “studying” because everything we do has a learning process and integration period. There is no such thing as “just learning the steps” when it comes to Arts For Learning programs. Everything has to connect to the larger picture of education and understanding of the environment. That is what makes my job so fulfilling! So, the children in Kindergarten and first grade have begun to learn that the environment surrounding us is unique and rich with a diversity of plants and animals. They interpret these diverse species and the way they interact through creative movement and given choreography. Meanwhile, the older group (2nd and 3rd grade) have memorized Native American myths and learned some basic Seminole vocabulary words, which becomes a performance through dance-theater and narration.

I love those moments when you know you are doing something right; those times when my class is so engaging that even the coaches have to join. Recently, as one of my classes was ending, other children at Flamingo Park entered the room to begin the next activity of the day. We were finishing up a movement exercise, so the others sat off to the side to watch television. They ended up becoming so riveted by the class that they forgot to watch the television program that was turned on for them. Afterwards, they all began to play the movement game, as the T.V. went on unnoticed. The staff was really impressed and made me feel extra proud that day!

By far, the best days are when the students become the teachers. My girls never stop amazing me with their brightness and innovation. I feel more like a facilitator than an instructor sometimes. For example, two weeks ago, Amira, one of my students in the older class, taught us how to count from 1-10 in Arabic. We all really wanted to remember, so we played a game by adding movement sequentially to make a phrase. Each person was assigned one number and told to come up with a movement that simulated the sound of the word (the way to say “four” sounded like “beard” in Spanish, so one student created a gesture of stroking her goatee), which we then strung together to make a choreographic phrase. I was proud of my students and realized that they taught me something that day. This process worked so well that the girls counted from one to ten in Arabic for me in my last class.

I’m greatly looking forward to the upcoming performance. How many people get to say that they can’t wait to go to work on Monday?