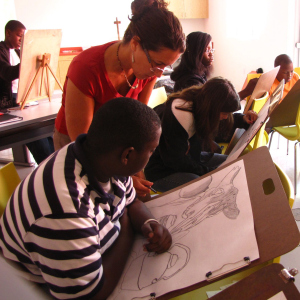 Jenny Llewellyn-Jones was born and raised in Lima, Peru, where she received a BA in Architecture from Ricardo Palma University. Upon graduating from college, she relocated to Miami and worked with several Miami-based firms for 10 years, gaining experience in the field of Architecture.

She then married and raised two beautiful daughters, who inspired her to pursue a career as an educator. Ms. Llewellyn-Jones now holds an MA in Art Education from Florida International University and has worked in the Miami-Dade County School Public School System since 1996 at both elementary and middle school levels. She is currently an art teacher at George Washington Carver Middle School and received the 2008-2009 Teacher of the Year Award.

It is her goal as an art educator to nurture the creative spirit in children and to lead students to understand art as a form of expression. Her students have consistently exhibited artwork and received awards of distinction in various Miami-Dade County Public Schools art shows. Her work extends beyond the classroom to involve students in school-wide projects, murals and inter-disciplinary collaborations. In addition to her accomplishments as a professional educator, Ms. Llewellyn-Jones develops her own artistic interests through drawing and painting and is an avid dance improviser.