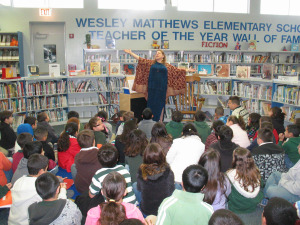 A4L Teaching Artist Carrie Sue Ayvar is a third generation bilingual storyteller, dedicated to preserving and promoting this folk art. Telling in both Spanish and English, she has worked as an artist and educator for over 25 years with preschool and school aged children, as well as adults in the United States and Mexico. She has performed in private and public schools, colleges, at parks, libraries, community festivals, museums, outreach programs and conferences. She is an Executive Board member of the Florida Storytelling Association and Florida’s liaison to the National Storytelling Network.Her training includes: The Kennedy Center programs for the Performing Arts; National Storytelling Network Conferences, 2000-2008; movement classes with Tony Montanaro (founder of Celebration Barn Theatre, Maine); and Big Apple Circus New York.